Catania is Sicily's largest city on the eastern coast. lying at the foot of Mount Etna and facing the Ionian Sea. Rich in monuments and historic dwellings, it definitely is a city of art. The Roman Theatre and Odeon and the medieval Castello Ursino, housing the Civic Museum's archaeological and art collections, are the most impressive ancient monuments, since Catania was completely rebuild in the 18th century, following a Mount Etna's historic eruption and a devastating earthquake.

18th century buildings surround Piazza Duomo, the center of political and religious powers, where the Palazzo degli Elefanti stands, housing the Town Hall, the Seminario dei Clerici (Seminary of the Clerics) and the Cathedral dedicated to Sant'Agata, preserving valuable art works. The patron saint is celebrated on the first week of every February with the Candelore's feast. Huge candles are carried in procession by members of the local confraternities.

Elegant 18th century buildings line along the lively Via Etnea, famous for its historical pastry shops serving delicious local sweets and desserts, such as ''cannoli'', ''cassatelle'' and almond paste. Close by is Palazzo Biscari, a sicilian baroque masterpiece, embellished by a magnificent terrace overlooking the sea.

18th century Via Crociferi boasts a concentration of the most representative sicilian baroque buildings. Richly decorated façades with staircases, statues and columns adorn the churches of San Benedetto, San Francesco Borgia and San Giuliano. The street can be entered through the magnificent arched entrance of Villa del Principe Cerami, housing the University. Catania's University also occupies a part of the Monastero di San Nicola Arena, once the seat of the powerful religious order of the Benedictines. 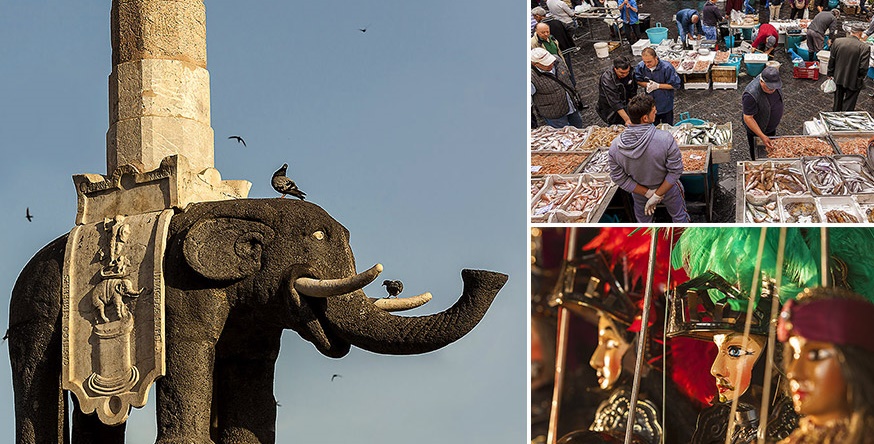 The opera house Teatro Bellini is the local temple of music and bel canto (beautiful singing). It is the hub of the city's cultural scene since its opening in 1890. It was inaugurated with the performance of Norma, considered the masterpiece of the local composer Vincenzo Bellini.

Catania's most famous dish is named after this opera piece, the pasta ''alla Norma'', topped with tomato, fried eggplant and salted ricotta. The local cuisine is mainly made of fish specialties, such as ''sarde a beccafico'' (stuffed sardines). The picturesque fish market is a not-to-be-missed tourist attraction, rich in Mediterranean colors and scents.