Dominating the Bay of Giardini Naxos on the natural terraces of Mount Tauro, stands Taormina, one of the world’s most important tourist destinations.

Founded in 358 BC by descendants of the Greek colony of Naxos, and reaching its peak in the Augustan age.

Built by its founders, Taormina's Ancient Theatre is considered to be the largest classical theatre in Sicily after Syracuse and the most impressive in the whole of Greater Greece because of its unique location and natural scenery. 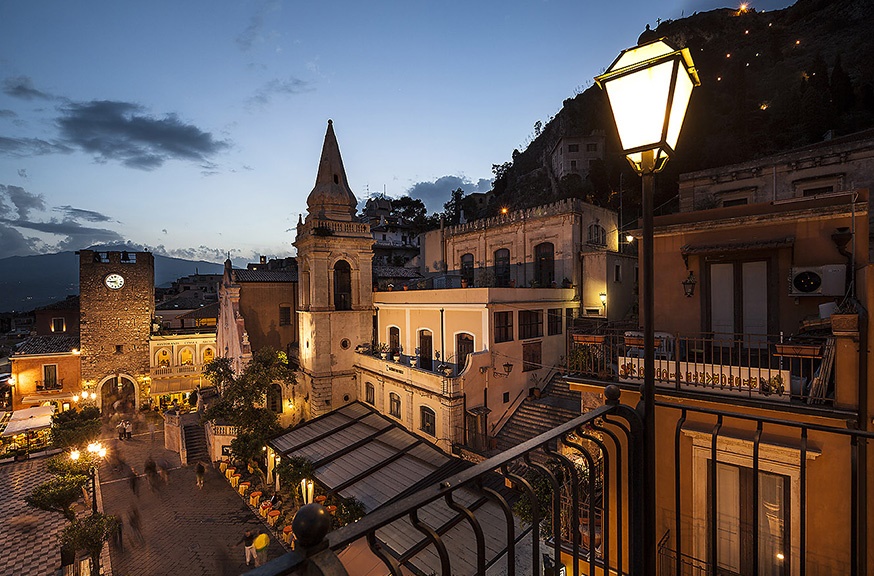 According to Greek criterion, it is divided into three sections the Cavea or Auditorium where the spectators sat; the Scene, protected by a wall of Corinthian columns which are now partially ruined and the Orchestra ,a semi-circle shaped area at the bottom of the stage occupied by musicians. Built to host classical performances, it is an extraordinary spot for theatrical, musical and dance shows, usually taking place in the summer

The town has preserved its charming medieval structures, made unique by the presence of monuments and palaces of every period and style. The heart of Taormina is the wide Piazza Aprile IX with its large balcony overlooking the Gulf of Naxos and Mount Etna. The square is more or less half way along the Corso Umberto, north by Porta Messina and south by Porta Catania.

The Cathedral, built in the 15th century during the reign of Frederick of Aragon, is a real Norman style fortress church, that offered refuge to the population many times against the attacks from the Saracens that raged along the coast. 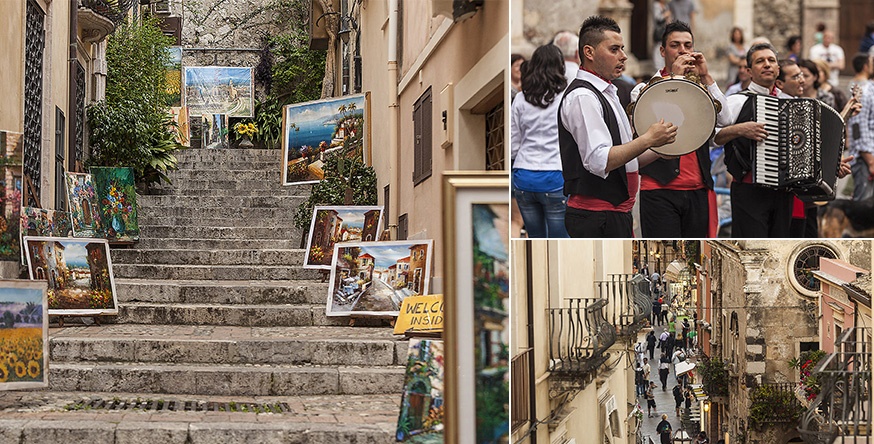 Palazzo Corvaja the most famous of Taormina's ancient palaces. It is basically a mix of architectural styles that have marked the city throughout the centuries, from Arabic to Norman and Sicilian to Gothic. It houses the Hall of Parliament, embellished by elegant Gothic windows, where Sicilian noblemen held their meeting, presided by Queen Bianca di Navarra, Regent of the kingdom of Sicily after the death of her husband Martin II of Aragon.

Corso Umberto is a network of narrow streets, stairways and small squares mostly covered on foot and pervaded by the colors and overwhelming scents of jasmine and bougainvillea accompanied by a glimpse of amazing picturesque views. A wide range of Mediterranean plants, flowers and rare species also welcome visitors to the Park Duchi di Cesarò, better known as Villa Comunale, a typical English garden dotted with oriental buildings. The legacy of an English noblewoman who had a passion for gardening. It is a privileged location for artistic and cultural events and shows in the summer.