Mondello is a hamlet of Palermo characterised by a sandy beach and by the picturesque landscape offered by Monte Pellegrino and Monte Gallo. From Palermo this popular seaside resort can be reached by driving along the tree-lined avenues of the Parco della Favorita, a large green area inaugurated by Ferdinand III of Bourbon in 1799.

The lido is characterised by typical tropical colours, with the white beach and the blue sea of its shallow waters. It seems impossible, but until 1891 the whole area was a swamp. Its name, “Mondello”, comes from the Arabic word "Marsa 'at Tin", which can be translated as the “Port of mud”. After the area had been reclaimed, Luigi Scaglia, a Milanese businessman fell in love with Mondello and came up with the idea of a lido. “Bello ristoro”, however, was built by a Belgian company. It was 1909. The facility was originally designed for Ostend in Belgium by Rudolf Stualker. Mario Rutelli, with his construction company, built a reinforced concrete building on stilts, able to resist the corrosive action of salt and water. This beach facility is still considered as one of the finest examples of Art Nouveau in Europe.

Mondello, which was an exclusive beach at the beginning of the twentieth century, is now the most popular beach in Palermo and many tourists come here from all over the world. 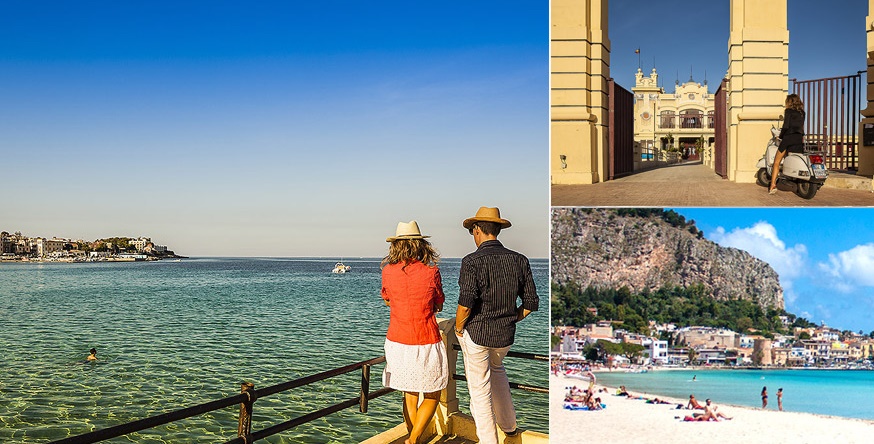 Fragrant scents fill the warm air of summer days: the smell of the sea blending with the aromas of the food sold in the street and those of refreshing drinks served to tourists. Here, indeed, lemons are squeezed several times a day to offer the tourists a delicious granita. A real triumph of flavours for the palate.

The silence is broken by the shouts of street vendors attracting bathers to show them their products, including donuts, fruit, pistachios and peanuts.

The sounds change with the seasons. In summer, bathers' shouts and laughs brighten up the day , while in winter the silence is a source of inspiration for artists and poets, that is why “Mondello Literary Prize” was founded in 1975 to celebrate literature. The “World Festival on the Beach”, with sailing, beach volleyball, windsurfing and kite surfing competitions, is also held in Mondello, while music lovers should not miss “Sinfonia on the Beach”, a famous concert organised for the first time in 2004.

There are many Art Nouveau style villas in Mondello, and there is also the so-called “Haunted Mansion”, located in front of “Palace Hotel”, where terrible atrocities were committed. During the Second World War, indeed, the soldiers broke into the house, used as a brothel, and killed everyone.

In 1962, Luchino Visconti chose to shoot “Il Gattopardo”, one of his most popular movies.

Tourists come from all over the world to take amazing picturesque of Mondello and the surroundings.