Regional capital of Sicily, Palermo is the largest city, with a population of over 600,000 inhabitants. Arabs, Normans and Spaniards took turns over the centuries to rule the main center of the Conca d'Oro, transforming it into one of the culturally richest and most powerful cities in the Mediterranean. The different populations throughout the years has left a legacy of unique architectural masterpieces, which help form a historical center which is amongst the largest ones in Europe. 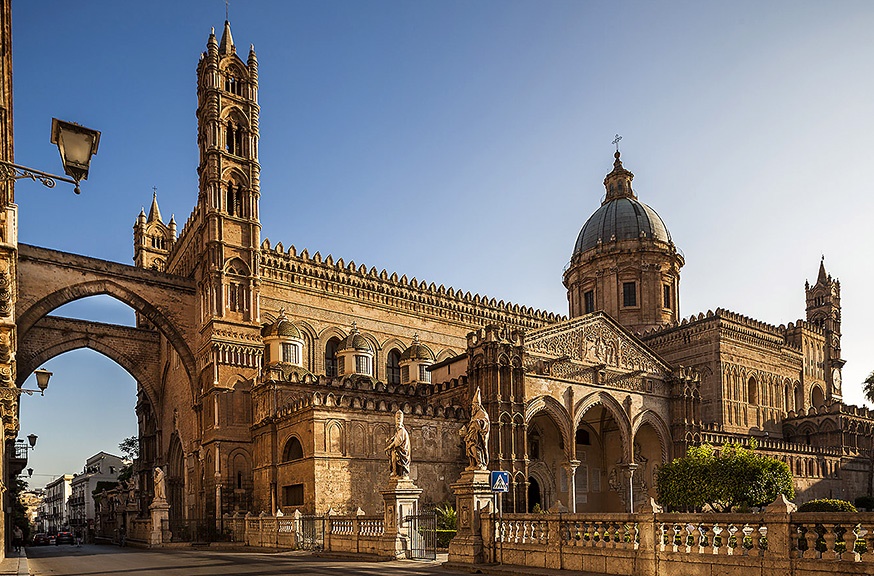 The most representative building born from the mix of styles and cultures is the magnificent Cathedral built over seven centuries, inside of which lies the kings of the House of Swabia. A splendid example of the fusion of different architectural traditions is the Palazzo dei Normanni, which now hosts the Sicilian Regional Assembly. Inside the famous Cappella Palatina is being housed, one of the most visited monuments in Sicily. A masterpiece of Islamic art, offers magnificent Byzantine mosaics, listed among the most beautiful in the world. Of great importance is also the church of San Giovanni degli Eremiti, whose five domes became the symbol of the city.

Piazza Vigliena is a Baroque anthem style. Also known as Quattro Canti (four songs), on July 15th it becomes the set of the festivities in honor of Santa Rosalia, the patron saint of Palermo. Followed by the inhabitants with great involvement, ‘’U Fistinu’’ culminates with a procession of the triumphal chariot through the streets of the city in remembrance of the miraculous discovery saint’s relics in the 17th century.

The cultural package offered by the Sicilian capital is enhanced by the Teatro Massimo, one of the most important opera houses in Italy and the third largest in Europe.

You can enjoy is a visit to the Catacombe dei Cappuccini (Catacombs of the Capuchins), in the Capuchin monastery, where many embalmed bodies are preserved. A visit there is a perfect way to learn about the customs and traditions of the 17th-19th century society Palermo. In the same area you will also find the Zisa, an Arabian palace which was the residence of the Norman kings, who ruled all of Sicily from here. 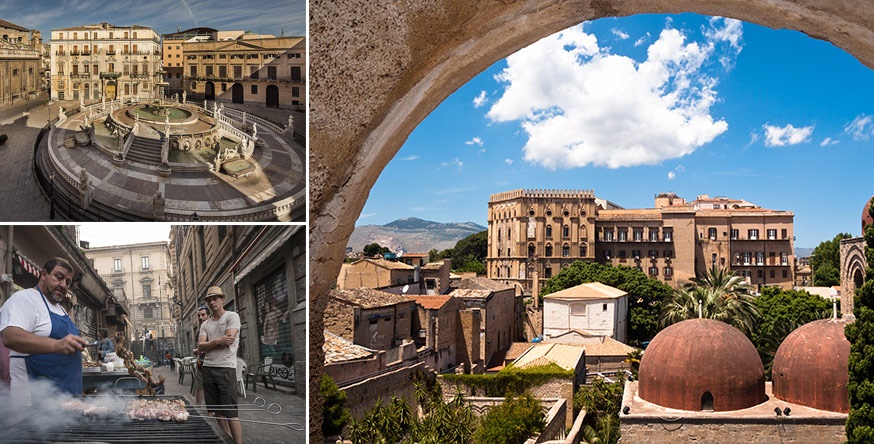 The melting pot of cultures and traditions also influence Palermo’s cuisine, characterized by intense and spicy flavors. The most popular specialties range from fresh fish dishes to spicing with raisins and pine nuts, from ‘’pani ca meusa’’ (sandwich stuffed with spleen) to ‘’panelle’’ (fritters chickpea flour), ‘’arancine’’ (rice balls) and ‘’sfincione’’ (pizza with tomato, onions and anchovies). Particularly popular and delicious is the local pastry, with Sicilian classics like ‘’cannoli’’, ‘’cassata’, marzipan fruits, and most of all the ‘’Setteveli’’ cake, made of seven different layers of chocolate.

A not to be missed ritual while in Palermo is a visit to city markets, allowing at the same time to buy local products and immerse in the authentic local atmosphere. Amongs the local markets, the ‘’Vucciria’’ is known to be the oldest one, while ‘’Ballarò’’ is the most popular.

In Palermo, traditional craftsmanship is still frequented and lively. Along the streets of the old town the most picturesque shops and the most famous Sicilian puppet theaters can be found.